Last year, more than 94,000 people from over 200 countries visited MWC (Mobile World Congress), which means Opportunities, Opportunities and opportunities! In this year’s MWC, Ericsson, who occupied the largest area of the exhibition hall, mentioned without taboo that they made a lot of money from the exhibition. It was said by the president and CEO Hans Vestberg that visitors at MWC could bring 90% of the whole year’s income.

Wow, so many businesses were done in only four-day exhibition. MWC sponsors must have spent a lot of money. For CMOs, who controls the market budgets, how to spend money on the most important things to make the boss happy, to make the sales teams comfortable, and the most important is to capture the hearts and minds of customers, comes to be their priorities. In MWC2016, these ten sponsors made it. Let’s go to figure out how did they made it.

Logo was printed in all space, including booth top, leaving any one side that the audiences may see not missed.

MWC exhibition design included two-floor passages. The booths were in Floor 2. The so-called Floor 2 was leading to the rapid passages to the various exhibition halls. If you want to quickly find out the booths you want to visit, or to go quickly to an exhibition hall, you can take the escalators to Floor 2 to quickly go through the exhibition halls. So Floor 2 is almost a must-go-through route for all visitors. Moreover, the situations of each exhibition hall could be seen in this passage. The “tops” of the booths near the passage could be seen too. So, there were a number of exhibitors near the passage choosing to display their Logos on the tops, which was equivalent to one more Logo wall!

IBM always makes a difference. What it did was like this: The booth tops of other exhibitors were like this 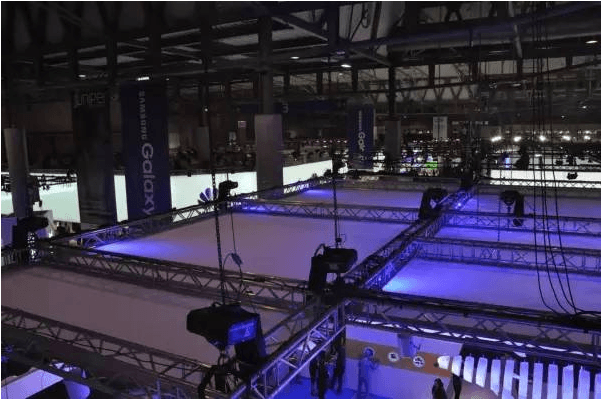 There was another company called Telenor group also took this way: 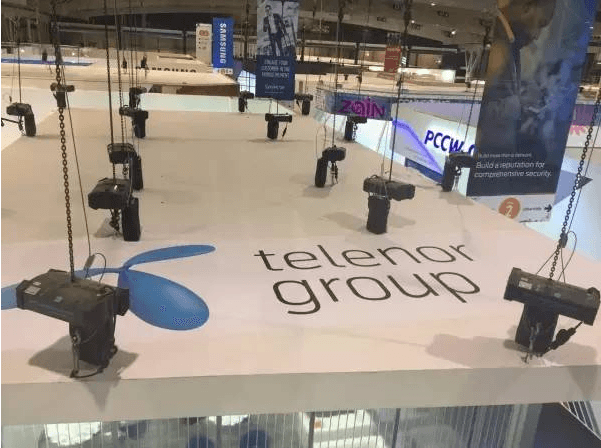 There was another one using the same way: 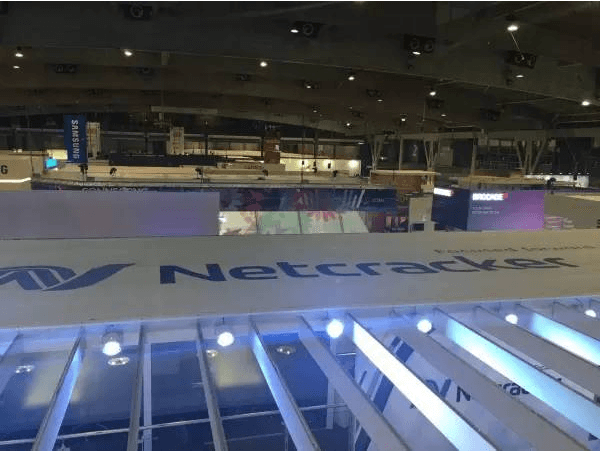 Making full use of the must-go-through route

This is the entrance of the subway station: 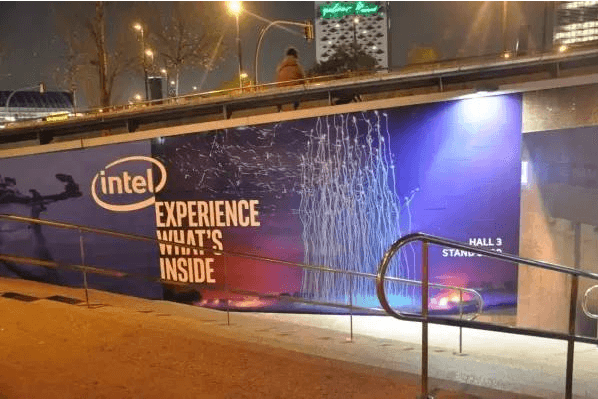 The underground passages was not forgot: 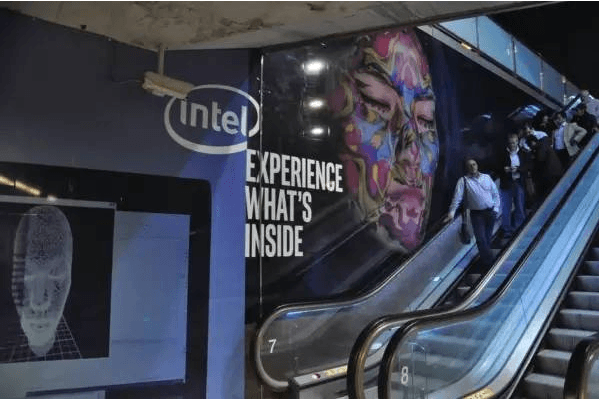 Even the big columns: Providing tools to the audiences

A company called POWEMAT, although not heard of by a lot of people, but now, it is known to all the audiences who have been to MWC as a company providing charging tools. At the passages of the exhibition hall was their charging tricycle, which attracted the attentions. And then, it was found out that the tricycle could also be charged, which was really a surprise. 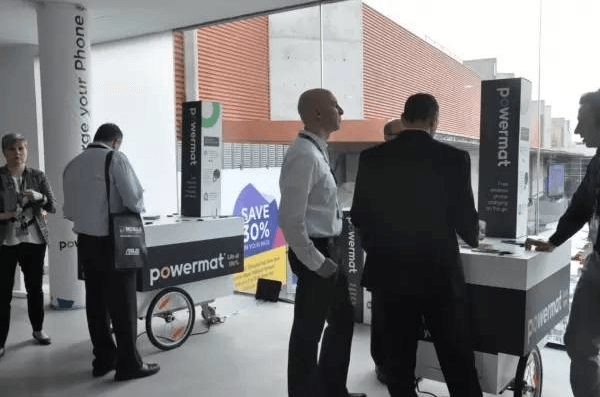 Later, it was found out that in the media village, there was such a small table which could also be charged. What about when you are tired after visiting exhibition halls. Of course, coming to the rest area would be a good choice!

So, Paypal chose to put their ads at the rest area. 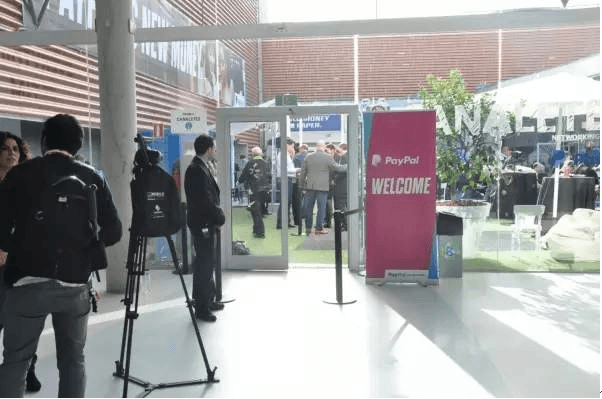 PayPal also in the rest area. The manufacturers with consciousness of spreading

TIM chose to be the sponsor of the MWC media center and gave TIM knapsacks to the reporters from all over the world. This was a great opportunity for the global media to know them. 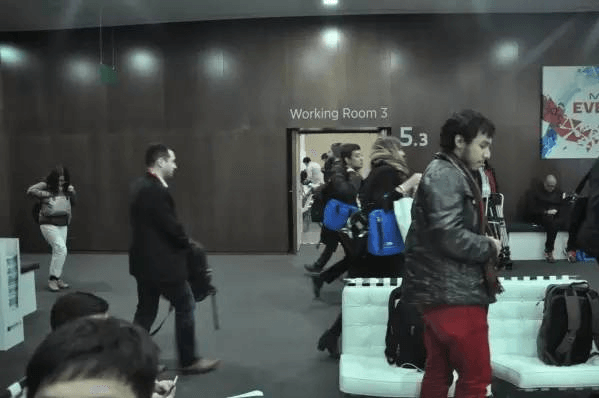 With a momentum of overwhelming the crowds

Of course, this was a “local tyrant” approach, but also the most effective way for investment in the exhibitions, which attracted every audience to visit your booth, because it was really domineering.

The company that did like this was that one mentioned at the beginning and achieved 90% of its accounts receivables in MWC, is Ericsson. The venue for Ericsson was so big that Ericsson’s global reporters and analysts meeting was held in their own exhibition hall. 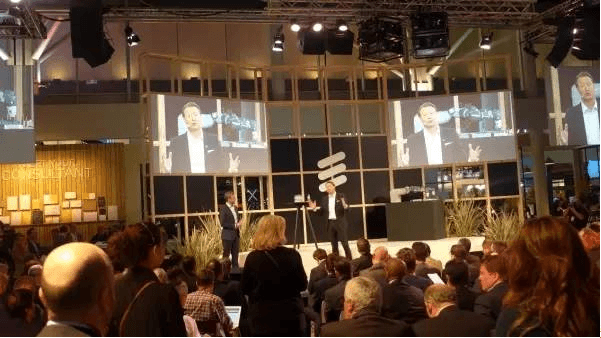 In Ericsson’s exhibition hall, there were coffee, simple meals, as well as their own independently used bathrooms.

The visitors walking through will see the suspended ads.

Samsung and juniper were sponsors who were good at earning most eyeballs. They chose to put hanging ads on the conference hanging plates, so that every participating guests could always see them. 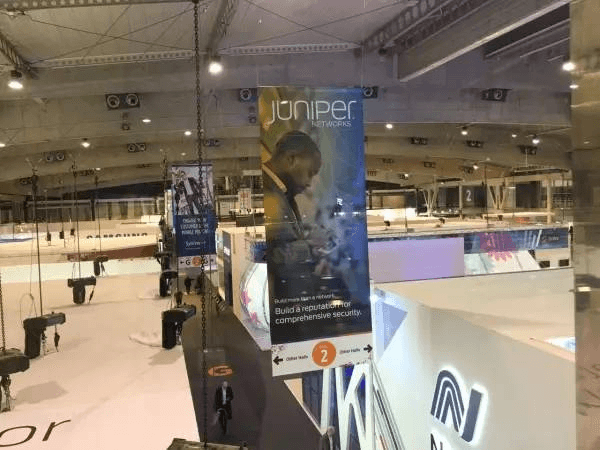